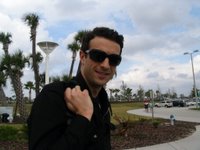 Observing Vladimir in Orlando reminded me of the great film, STRANGER THAN PARADISE, a story about America as seen through the eyes of "strangers". It’s about exile, both from one’s country and oneself, and about connections that are just barely missed. Perhaps Slackjaw should do a remake starring Mr. Subotic? Click on photo for larger image.
Posted by Katie Bowen at 6:34 PM No comments: Links to this post 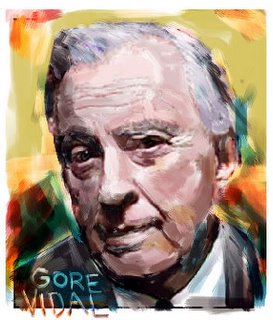 "All children alarm their parents, if only because you are forever expecting to encounter yourself."
Posted by Katie Bowen at 3:41 PM No comments: Links to this post 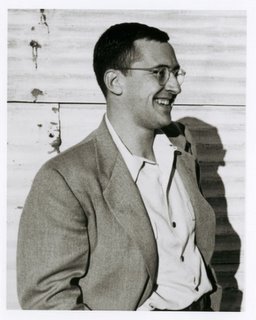 The following is a beautiful tribute to my father by a very dear friend, Aaron Gallegos:

Yesterday was the 10th anniversary of Roger Bowen's passing. Even though I don't feel I knew him that well, he was a big influence on me in a lot of ways. His daughter, Katie Bowen is a very important person in my life and through her I had the opportunity to get to know her father some in the late 80s. I don't think we ever had enough time together to get to know each other really well (he lived in New York and Katie and I lived in California), but I have great and lasting memories of him.

Back then he gave me an incredible walking tour of Manhattan, offering great detail about the history of each neighbourhood we passed through. Especially because of later events, I will always remember walking with him between the two towers of the World Trade Center. The buildings seemed so incredible to me at the time. Almost a force of nature in and of themselves. "50,000 people go to work every day in those buildings," Roger told me. I was totally awestruck. I don't even think the town where I lived at that time even had a population of 50,000.

Another time, after a fellow India Joze chef, Bill Forte, and I made a big Asian meal for the Bowens, Roger gave us one of the best compliments I've ever had about my cooking. "All of the dishes were great," he said, "but the rice was absolutely perfect and that's how you can tell it was cooked by a great chef." Or something to that effect. He also once surprised me by making a trip all the way to Princeton just to pick up a book I needed for my thesis.

Of course, Roger Bowen was also a famous actor. He played Col. Henry Blake in the M*A*S*H movie, was a co-founder of Chicago's Second City comedy troupe, among many other great accomplishments (see his biography link below). But that's not what I remember him for. The most important thing Roger Bowen taught me was how to be a great father to a daughter (or a son). I will never forget the relationship I witnessed between him and Katie. I don't even think they were aware I was watching, but Roger showed me what it is for a father to be loving, supportive, and emotionally present for his daughter, while at the same time respecting and honouring her as an adult with her own creative path in life. I always felt deeply honoured to be able to share in a small part of their relationship when we traveled to New York.

Another friend of mine who recently lost his father told me that his dad was and always will be his hero. He said that seeing the pictures on baby Amado on this blog eased his pain. "Now it's our turn to be heroes," my friend told me. Now, as a new father, I am so thankful that Roger Bowen showed me something about how to do this.
Peace, love, and blessing on Katie and everyone who loved Roger as we remember him at this time.

Here's a link to one of Roger Bowen's film biographies:

http://movies2.nytimes.com/gst/movies/filmography.html?p_id=7728&mod=bio
Posted by Katie Bowen at 7:33 PM No comments: Links to this post 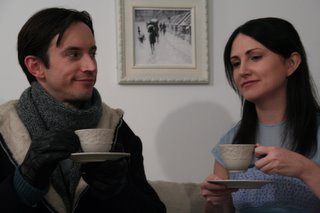 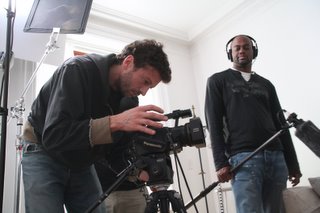 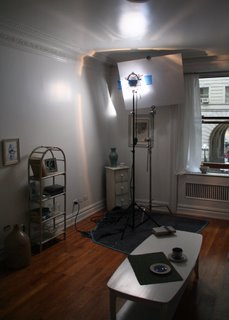 Posted by Katie Bowen at 6:54 PM No comments: Links to this post

Walking through Ft. Tryon Park one cold winter day, Edgar, a lonely young man who nevertheless knows exactly what he wants, sees Eve gazing at the Hudson River and wearing no coat. He immediately falls in love with her, and tells her so. She invites him to tea the next day to prove it.

When he arrives at Eve's home, he finds it's as cold as outside. Even though Eve's lips are a bit blue, the temperature doesn't seem to affect her. He keeps his coat buttoned and his gloves on as she serves him cold tea and shows him her most treasured possession, a photo book filled with odd pictures of bones and brains. This is who she really is, she tells him.

He's put off at first as he leafs through the book, at the sight of all those bones and brains, but then he starts to see how different and beautiful they really are.He pulls off his gloves, unbuttons his coat, and drinks his tea. And when he kisses her, she does something she's never done before...

Cold Tea is a short film shot on digital video and is headed for the short film festival circuit upon completion.

I’ve just had my coffee and now I'm loving you-
I’m ashamed to admit it but we both know that it’s true.
Coffee is the thing I need to turn my cold heart warm-
And pull from me the sunshine in the middle of my storm.
I’ve just had my coffee and now I’m loving life-
And to think that just an hour ago I was an unfullfilled housewife.
Now my heart is full of love and how I'm loving you-
All because I had a cup of caffinated brew.
Posted by Katie Bowen at 12:24 AM No comments: Links to this post

What happens when two perfect people meet? Well, they fall in love and then, eventually find out the truth about one another.

I recently received my astrological chart from singer/songwriter and Jungian Psychology buff, Francis Dunnery. Much of it was so accurate it got me thinking. What if there was a dating website where member profiles not only included the lies people told about themselves, but where the ugly truth was slipped in as well? Think anyone would get a date?

Here’s a possible profile based on my chart. Some fact, some fiction, some pulled right out of a Libra Moon:

I'm 42, physically fit, sexy and charming. I'm a great source of comfort to those in need. I'm a homebody but also enjoy having cocktails in basement jazz clubs on hot Greenwich Village nights. My need for perfection is an enormous source of anxiety and often takes over my life. I'm in constant need of an audience and my emotions are untamed. If I see you talking to a beautiful woman, I will be jealous and get pissed--guaranteed. I’m looking for a man who will fulfill my dreams and help to sustain the fantasy world I prefer to live in. He must make me feel special, loved and whole, and be a father figure to my overindulged, bratty 8-year-old daughter.

Responses: 0
Posted by Katie Bowen at 12:17 AM 3 comments: Links to this post